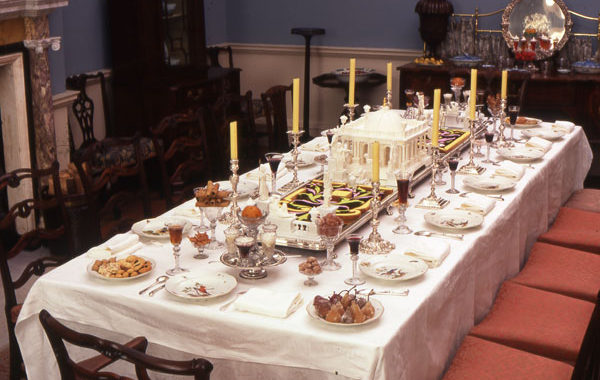 March 30, 1786, is not a date that resonates in American history. But from the perspective of historians of early America and of the Greek Church perhaps it should. Certainly for the latter it is noteworthy that more than eight years before the Russian mission arrived in Alaska two future Presidents of the United States were sitting down to dinner in London with a priest of the Orthodox Church of Russia.

As is the case this year, this day 231 years ago was also a Thursday. In 2017 it will be the Thursday of the fifth week of the Great Lenten Fast. In 1786 Easter fell later and so it was only the second week of Great Lent. Some might say this would make it a less than apposite time for a dinner party. Nevertheless it is a dinner party that evokes our interest.

A London Dinner from the Diary of John Adams

The description of the occasion we have comes from the diary of John Adams, who almost exactly ten years later would become the second President of the United States. Adams had recently arrived in London having been appointed in 1785 as American first minister to the Court of St James (equivalent to today’s Ambassador to the United Kingdom). Cavendish Square in London. Home of John and Lucy Paradise.

Adams took with him to dinner that evening his colleague the American Minister to France, Thomas Jefferson (the future third President of the United States). Jefferson was exactly two weeks into a five-week visit to Britain, a trip he would never repeat.

Other members of Adams’s family are mentioned as being present and these almost certainly would have included his wife Abigail and his daughter Abigail who had both joined John in England the previous summer. Colonel Smith, the secretary of the American legation in Britain and soon to be husband of John’s daughter Abigail is named as being present. In 1807 Smith would be elected to the U.S. Congress to represent a district in upstate New York. The host and hostess for the dinner that day were John Paradise and Lucy Ludwell Paradise, the son-in-law and third daughter respectively of Philip Ludwell III. Almost twenty years after Ludwell’s death in 1767 the Paradises were still active in the small Orthodox parish in London that fell under the care of the Holy Governing Synod of the Russian Orthodox Church.

It is my speculation that the purpose of the dinner may primarily have been to introduce Jefferson to his Russian counterpart, Count Semyon Vorontsov, who had also arrived in London in 1785. Accompanying Vorontsov was “his gentleman and chaplain.” This was the Russian Orthodox priest Fr James Smirnove, who had begun his eventual sixty-year service in London in 1780. For the sake of completeness I should also mention that the other guests present were the Venetian minister Sodorini and Dr Edward Bancroft. Bancroft was a Doctor from Connecticut who had acted as an agent of the Continental Congress in Britain during the Revolutionary War. He remained in London after its conclusion and clearly enjoyed the trust of John Adams. Similarly Benjamin Franklin had always staunchly supported Bancroft during the war against accusations  from Arthur Lee ( a nephew of Philip Ludwell III) that Bancroft was a double agent. Only in 1890 would documents be released that confirmed the truth of Lee’s accusations.

So all told this was a diverse and interesting group of people. What did they discuss? To date I have found no record of the conversation that evening but I think we can infer from letters and actions over the ensuing twenty years that the dinner marked the beginning of some perhaps unexpected relationships and activities. For now we will focus in on only one of these. The Ludwell-Paradise House in Williamsburg, Virginia – part of the Ludwell estate.

In August 1787 John and Lucy Paradise set sail for America with a view to settling disputes over their ownership of ancestral lands in Virginia that were inherited from Lucy’s father Philip. They spent the New Year’s season of 1787/88 with George and Martha Washington at Mount Vernon. Martha was first cousin to Lucy’s mother Frances Grymes Ludwell (wife of Philip Ludwell III). Meanwhile back in England in February 1788 John Adams had left his post in London and returned to the United States. Just over a year later in April 1789 George Washington assumed office as first President of the United States and Adams became the Vice President. Jefferson remained in Paris until September 1789. Shortly after his return to Virginia he was appointed by Washington as the first Secretary of State of the United States.

Another of Washington’s initial appointments was that of Gouverneur Morris to fill the vacancy left by Jefferson’s departure from Paris. But he was also charged with resolving several questions with respect to Anglo-American relations and in this capacity he went to England. Morris’s visits to London brought him into contact with Count Vorontsov and almost certainly Fr James Smirnove. On April 10, 1792 Morris wrote from London to President Washington enclosing a pamphlet and stating:

During the Course of that Armament the enclos’d Pamphlet was publish’d under the Counts Inspection and Direction. You will collect from it some useful Information.

That same day he also sent the pamphlet to Secretary Jefferson writing:

You will find enclos’d a Pamphlet which was publish’d here on Occasion of the late Armament against Russia. It was written under the Inspection of a Person to whom the Facts were all familiarly known. I think if you have not seen it before you will derive some Pleasure from the Perusal. Extant copies of this pamphlet may be found today in the libraries of Washington and Jefferson and also of John Adams. What is it? It is a relatively short work entitled Serious enquiries into the motives and consequences of our present armament against Russia. It was written and published in London in 1791 with the aim of dissuading Britain and Prussia from supporting Turkey in its war with Russia. Clearly obtaining American support in this objective was seen as important by the authors. Washington had already received a copy that was sent to him on May 10, 1791 by his friend the London merchant Samuel Vaughan. The President responded to Vaughan in August thanking him for sending this and similar publications writing:

The convulsed state of Europe at the present moment cannot fail of attaching every American more strongly to his own country—and government; while every heart must be impressed with lively gratitude towards the supreme Ruler of events upon a recollection of the circumstances which have brought us to our present political situation.

The anonymous authors of the pamphlet read by Washington were none other than Count Vorontsov, Fr James Smirnove, and John Paradise. The latter would be rewarded with a substantial pension from the Russian Empress Catherine the Great for his hand in this and the peace that was maintained from these efforts. I am sure that when the Paradises sat down with their guests for dinner two hundred and thirty years ago they did not imagine that the friendships first enkindled that evening would a mere five years later provide a foundation for a work that kept peace between their nations.
Share
Tweet
Pin
Share Post: