Three Associates journeyed to Williamsburg this week to investigate primary source documents relating to the Ludwell family and to introduce our project to officials of the National Park Service. Nicholas Chapman, our executive director, and Deacon Nicholas Dujmovic joined me on the visit to Virginia’s colonial capital.

The Ludwell Family in 1716: A Momentous Year

Our first visit was to the College of William & Mary’s Swem Library, where the courteous staff of the Special Collections Research Center, led by Director Jay Gaidmore, showed us eighteenth-century books and handwritten letters belonging to the Ludwell family. The year 1716 was a momentous year for the Ludwell family. To begin with, Philip Ludwell I, who had returned to England many years previously (and who inherited Green Spring Plantation in 1680 after marrying Governor William Berkeley’s widow Lady Frances Berkeley), passed away in London. He was buried in the Bow Church in Stratford, east London, where his grandson Philip Ludwell III and his great-granddaughter Hannah Ludwell Lee would also be buried, in the 1760s and 1780s.

Meanwhile, back in Virginia, Philip Ludwell II, who was appointed Rector of the College of William & Mary in this same year, was involved in a dispute with Lt. Governor Alexander Spotswood over allegations that Ludwell had committed improprieties in his role of Auditor of Virginia.

As we perused these letters, which included Ludwell’s correspondence with William Blathwayt, Auditor General of the Plantations in London, we noticed another extant wax seal bearing the Ludwell family crest, shown here. It should be noted that the three eagles on Philip Ludwell II’s 1716 seal are single-headed, whereas Philip Ludwell III later modified these to be double-headed eagles.

Interestingly, students of early American history will note that Ludwell stated in his letter of “7br 10th 1716” that Spotswood was “gone to the mountains” – a reference to Spotswood’s leading the Knights of the Golden Horseshoe on the first official expedition over the Blue Ridge Mountains in August-September 1716. It was fascinating to read this letter, which was penned while this famous expedition was heading into the Shenandoah Valley for the first time.

The Special Collections staff also showed us two sets of books that were owned by Philip Ludwell III and later given by him to his daughter Hannah Ludwell, who married her first cousin William Lee on March 7, 1769 in London. One volume of The Method of Teaching and Studying the Belles Lettres included sections such as “On the usefulness and necessity of studying the Greek Tongue” as well as references to Patristic writings.

Another passage, shown in this photo, relates St John Chrysostom’s actions in relation to intrigues at the court of Emperor Arcadius, in which Chrysostom, on the day “the holy myfteries were to be celebrated … changed the hatred and averfion which the people had for Eutropius, into compaffion, and drew tears from the whole congregation.”

Another volume, titled A Voyage Into the Levant by M. Tournefort (of the Royal Academy of Sciences and Chief Botanist to the “Late French King”) and published in 1741, includes descriptions of Mount Athos and visual depictions of scenes that are familiar to most Eastern Christians – from Ephesus to Smyrna and beyond. Displayed here, for example, is a drawing from the book of “An Armenian Deacon & Subdeacon,” showing that educated persons such as the Ludwells would have had some familiarity with Eastern Christian worship and practices. Green Spring: Home to a Practicing Orthodox Christian in the 1740s and 1750s As noted throughout our website and blog, Philip Ludwell III translated Orthodox liturgical services and books on Orthodox religious practices. We also have documentary evidence about Ludwell’s conversion to Orthodoxy in London, his bringing his daughters to the faith in the same city more than twenty years later, and his desire to remain in sacramental communion with the Church while living in Virginia.

Given this information, it would seem almost certain that Ludwell maintained some fidelity to Orthodox Christian beliefs and practices while living at Green Spring Plantation outside Williamsburg. With much of colonial religious life based on plantations, we believe that the archaeological structure labeled “S” on the 1950s excavation map may be the first Orthodox chapel in America. Nicholas Chapman and Dcn. Nicholas Dujmovic at the only extant above-ground structure at Green Spring plantation, which approximates the size of Structure S.

We were fortunate to have the opportunity to discuss Philip Ludwell’s life and possible religious activity at Green Spring with two officials of the National Park Service’s Colonial National Historic Park, which maintains Green Spring, Yorktown Battlefield, and Historic Jamestowne.

As we have written about elsewhere, we expressed to them our interest in seeing a more vibrant interpretation and exposition of Green Spring’s history, which for now lies quietly under fields of grass, with springtime daffodils rising from the ground.

Many crates of artifacts from the 1950s Green Spring archaeological excavations remain unexamined on National Park Service property in Jamestown, a couple miles south of Green Spring. The Park Service performs exemplary work in maintaining, researching, and interpreting the sites under its protection, and we expressed our desire to assist them in determining whether any clues to 1700s Eastern Christian worship at Green Spring can be found amidst the excavation artifacts. Nicholas Chapman standing with a Park Service officer at the location of Structure S, possibly the first Orthodox chapel in America. 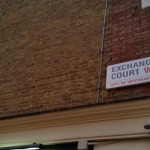 Photos: The Russian Orthodox Church in London in 1738
4 Comments