It is clear that Philip Ludwell III was intimately familiar with Eastern Orthodox prayers, having translated multiple works and liturgies into English from Greek. What’s more, Ludwell’s writings indicate that he considered prayer to be an important aspect of life and probably led a prayer life based on his own translations.

If you are unfamiliar with this 18th-century British-American from Virginia, you can read about Ludwell’s life here and his repose with Orthodox Christian rites in London here.

At some time, most likely following the death of his wife Frances in 1753, Ludwell began compiling a Commonplace book of Orthodox services, liturgical texts, and prayers that he translated. The book was subsequently added to by his descendants up until at least the 1820s. Within the section headed “Devotions for the Evening” he includes a prayer that today we almost entirely associate with Great Lent, the six-week period of fasting and abstinence that prepares us for the celebration of Christ’s passion and resurrection during Holy Week and Easter. This is the Prayer of St Ephrem the Syrian that Ludwell translated and set out thus:

O Lord & Governer of my Life, give me not
up unto the Spirit of Sloth, Inquisitiveness
Pride & Vain Conversation_____.

But bestow on me thy Servant the
Spirit of Modesty, Temperance,
Humility, Patience and Charity.

O Lord & King grant unto me to see my own
misdeeds & not to judge my Brother, for
blessed art thou for ever & ever Amen.

Than in perfect Charity offer the
general Intersession___. 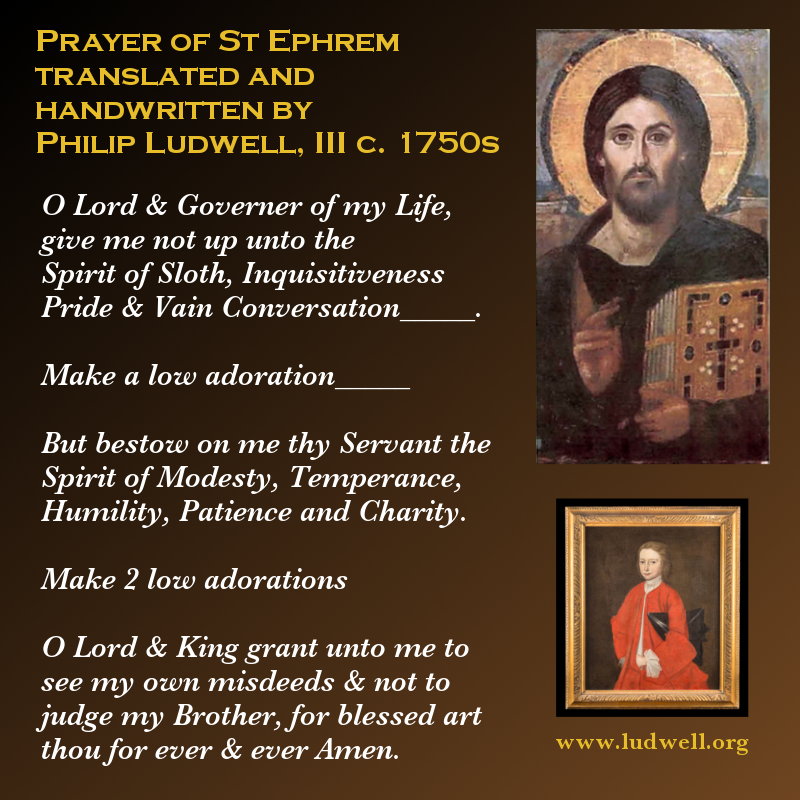