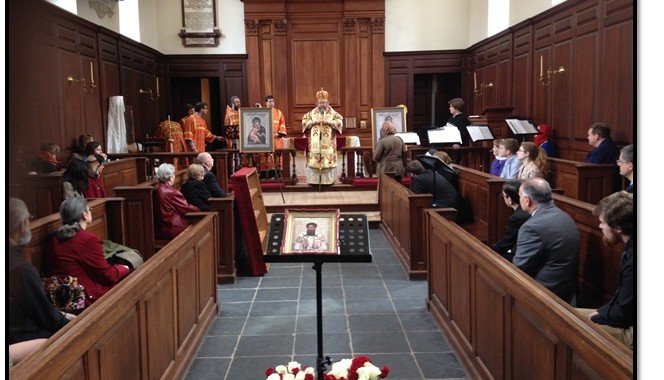 On Sunday, March 16, at the request of the College of William & Mary’s Orthodox Christian Fellowship, Metropolitan Jonah (Paffhausen; former Archbishop of Washington and Metropolitan of All America & Canada of the Orthodox Church in America) celebrated the Divine Liturgy in the College’s Wren Chapel in Williamsburg, Virginia.

The Liturgy, held in the colonial capital of Virginia, is believed to be the first ever Eastern Orthodox Divine Liturgy celebrated in the Wren Chapel in the College’s Wren Building, the oldest college building in the United States. The Wren Building is a 10-minute walk from Philip Ludwell III’s house (the Ludwell-Paradise House) along Duke of Gloucester Street, the main avenue of colonial Williamsburg. Colonel Ludwell is the first known American convert to Holy Orthodoxy.

The Liturgy was attended and supported by some seventy people, including faithful of numerous Orthodox jurisdictions from parishes in Virginia (including Williamsburg, Richmond, Culpeper, Northern Neck, and Fairfax), Maryland, the District of Columbia, and New York, with special assistance from the parish of St. John’s Cathedral in Washington and Holy Trinity Monastery and Seminary in Jordanville, NY. The President of the College of William & Mary, W. Taylor Reveley III, took time out of his busy schedule to attend the Liturgy, at the invitation of College students and alumni.

Philip Ludwell III was himself a student at the College in the 1730s, and his father served as rector there in 1716.

For more information on this event, see this notice on the website of the Eastern American Diocese of the Russian Orthodox Church Outside of Russia.