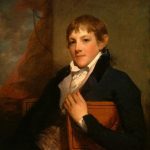 John Randolph, King’s Attorney in Virginia from 1766. A loyalist, he moved to England and corresponded with his cousin, Thomas Jefferson. His last request was to be buried in Virginia, and he now lies in the chapel at the College of William & Mary.

You sometimes find historical information in the most unlikely of places. Furthermore, what may at first seem to be of only ephemeral interest turns out to be the tip of a more complex tale, embellishing further a still emerging story. So it was when I recently stumbled upon the seventh monthly volume of the Farmers’ Register published in Petersburg, Virginia in 1839.

The aforementioned publication reproduces in full a short work entitled “A Treatise on Gardening” by John Randolph of Williamsburg, Virginia. John was the younger brother of the much better known Peyton Randolph, a leading Patriot who chaired the first Continental Congress that convened in Philadelphia in September 1774 to formulate resistance in the Colonies to the British Parliament’s Coercive Acts. But John was of a much different opinion to his brother Peyton and to that of his first cousin Thomas Jefferson. So as the American Revolution got underway John was forced to leave Williamsburg and move to London, where he died in 1784. Before leaving he wrote to Jefferson: “We both of us seem to be steering opposite courses.”

The First Continental Congress, held in Philadelphia in 1774. Peyton Randolph of the Colony of Virginia presided over the proceedings.

But whilst John Randolph and Thomas Jefferson may have been divided by the politics of their day, they were united in their love of gardening, a passion also shared by Philip Ludwell III. Randolph wrote his “Treatise on Gardening by a Citizen of Virginia” around 1765 whilst he was still living in Williamsburg, practising law and holding office as Attorney General of the colony. The Treatise consists of an alphabetical discussion of fruits and vegetables from “Artichokes” to “Turnips,” followed by a monthly list of when to plant these.

So what has any of this got to do with Philip Ludwell III or the awareness of the Greek Church in Early America?

The answer comes when we arrive at Randolph’s listing for lettuce: Randolph devotes a subsection of his lettuce entry to “The Aleppo and Roman lettuce cabbage” that he informs his reader may be propagated the earliest of any in the season. Randolph also says from whom he obtained the seeds for his Aleppo lettuce writing that “Col. Ludwell gave me some of the seed…” This would most likely have been before Philip Ludwell III moved to London in 1760. An advertisement in the Virginia Gazette from September 1755 includes amongst its listing “Ludwell’s Seedling” being sold by a William Smith at his nursery. So Ludwell was clearly in the business of seed distribution! 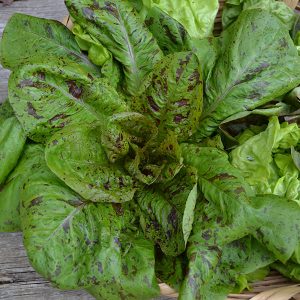 The website Rareseeds.com tells us that Aleppo lettuce was introduced in England in the 1680s and grown by Thomas Jefferson at his Monticello estate. The seed can be purchased in the United States from this site as well as from the Shop at Monticello whose website tells us that it is grown in the garden there.

It seems highly probable that Jefferson may have eventually brought the Aleppo lettuce seeds to Monticello after visiting the Ludwell plantation at Green Spring on April 24, 1768, only a little over a year after the death of Philip Ludwell III in London. This date is recorded in Jefferson’s Memorandum Book for that year. An editor’s note tells us that “Green Spring’s fine orchard and garden provided numerous additions to TJ’s own grounds at Monticello…”

We also have the testimony of a Mrs Drummond (who lived in the vicinity of Green Spring) some three years later who writes to Jefferson “that I hope You’ve not only received some hundreds, of Grafts, by Mr. Coles, of the choicest English fruits Green Spring afforded, but that you have grafted them too.”

The Ludwell and Paradise Families and Levantine Paschal Traditions

So how might Philip Ludwell III have discovered Aleppo lettuce seed and what might this tell us about him?

I have written elsewhere about the connections between the English mercantile Levant Company and the Orthodox Church that touched both Britain and America. Aleppo was one of the main trading bases of the Levant Company and Ludwell’s possession of the lettuce seed could well indicate some direct channel that he had with English merchants in Aleppo and perhaps their Orthodox associates.

A letter written to Benjamin Franklin in 1782 by Philip Ludwell III’s Orthodox son-in-law John Paradise clearly demonstrates that there were direct lines of communication to Aleppo. Paradise and his associate William Jones “beg leave to trouble him [Franklin] with the enclosed letter for Aleppo by the way of Marseilles…” Jones was actually fluent in Arabic having been tutored by a native of Aleppo living in England in the 1760s.

Most intriguing is the fact that Aleppo lettuce is one of the central elements of the Paschal (Easter) dinner in its namesake city. The lettuce is flavoured with garlic and perhaps mint and served as an accompaniment to lamb. Why not try it to both remember Philip Ludwell III and to continue the celebration of the Easter season? You can find a recipe here. Or if you prefer try Thomas Jefferson’s own twist on this rare Syrian lettuce, or at the very least feast your eyes on some beautiful photographs of his dish!