Mention the surname “Ludwell” these days you’ll likely get a blank stare. State the surname “Lee” and people will attach more meaning to the name. There’s Robert E. Lee, former Confederate general and US Army veteran. And there are other Lee names that ring a bell from the period of the American Revolution, such as Light Horse Harry Lee, Francis Lightfoot Lee, and Richard Henry Lee.

The last two Lees mentioned, Francis and Richard Henry, were brothers – both sons of Thomas Lee and Hannah Ludwell Lee of Stratford Hall plantation. Stratford Hall was built in the 1730s in the Northern Neck of Virginia, the land and peninsula that sits between the Potomac and Rappahannock Rivers. Thomas was a wealthy planter and prominent colonial official who married Philip Ludwell III’s older sister Hannah.

The Lee Brothers and the Birth of the United States 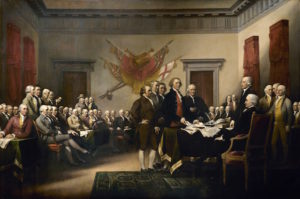 Declaration of Independence, by John Trumbull

Francis Lightfoot Lee was a signer of the Articles of Confederation and the Declaration of Independence as a representative of Virginia. He lived at Menokin Plantation in the Northern Neck. Although now in partial ruins, Menokin is listed as a National Historic Landmark and is undergoing unique restoration and preservation. Philip Ludwell III and his wife Frances were at one point owners of Menokin.

Francis’s older brother Richard Henry Lee, born one month before George Washington in 1732 (1731 O.S.), was a U.S. Senator from Virginia but is best known as the official chosen to put forth the motion to the Continental Congress in June 1776 to declare independence from Great Britain. The Declaration reads, in part:

We hold these truths to be self-evident, that all men are created equal, that they are endowed by their Creator with certain unalienable Rights, that among these are Life, Liberty and the pursuit of Happiness.

Richard Henry and Francis Lightfoot’s two younger brothers, William Lee and Arthur Lee, lived in London in the 1760s and 1770s, where they spent time with their uncle, Philip Ludwell III, who had returned to London in 1760 with his three daughters, Hannah, Frances, and Lucy, in part so that the three young women could be received into the Orthodox Church. This was accomplished on Holy Wednesday, 1762.

The Lee brothers’ sister Alice Lee (her husband William Shippen served as Director General of Hospitals of the Continental Army) also lived with her Ludwell cousins and her uncle Philip at his residence on Cecil Street, off the Strand. Following Philip’s death in 1767, William Lee would marry his first cousin Hannah Ludwell in London. Both William and Arthur were among the United States’ first foreign-based diplomats.

Prominence of the Lee and Ludwell Family Names

While the Lee name became one of the most recognized of American surnames during the 1700s and 1800s, the Ludwell name had fallen from prominence by the end of the eighteenth century. In fact, in the 1750s as a prominent member of Virginia’s Council of State, Philip Ludwell III made an official visit to New York City to welcome Lord Loudoun, the new commander of British forces in North America during the French and Indian War (Seven Years War).

As Ludwell returned to Virginia through Philadelphia in September, 1756, the Pennsylvania Gazette tells us that he “made a very generous Present of Twenty Pounds Sterling to the Academy, and Ten Pounds Sterling to the Pennsylvania Hospital.” These were both important initiatives of Benjamin Franklin who was careful to publicize them in the newspapers in order to encourage others to follow Ludwell’s example. Ludwell would later be a supporter of Franklin’s founding of schools to educate African-American children, part of Franklin’s work as chairman of the Bray Associates.

Twenty years later, Thomas Jefferson drafted the Declaration of Independence in the same city. Still later, in the 1780s when he was minister to France, Jefferson made an official statement, marked with the great seal of the United States, that the Ludwell family was one “of the most distinguished in [America] from its first settlement, for their wealth, and the honours & offices they have filled.”

Origins of One of Virginia’s Early Free Black Settlements 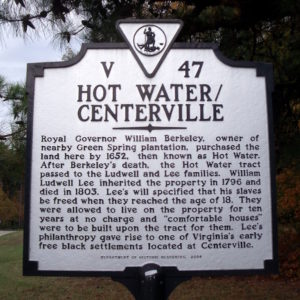 The Lee brothers held their uncle Philip Ludwell III in such esteem that William, his son-in-law, requested in his own Will in the 1790s that his son and heir, William Ludwell Lee, drop the name of “Lee” and henceforth only use the surname “Ludwell” – an act which seems unthinkable to modern ears. Indeed, it was left to Philip Ludwell III’s grandson, William Ludwell Lee, to fully apply the principles of the Declaration of the Independence that earlier family members had avowed but failed to fully enact. Indeed, in the 1770s, Arthur Lee chastised his brother Richard Henry for his decision to participate in the slave trade, stating how awkward and hypocritical it would be “that a strenuous opposer of this trade should be an agent in it.”

Over 25 years later, William Ludwell Lee embraced the full ideals of the Declaration when he made provision in his will for the manumission of the enslaved African-American residents of the Ludwell/Lee Green Spring Plantation following his death, which occured in January 1803. In 1804, his slaves aged 18 and older were freed, with provisions for their education and support.

Today, this act and the freed slaves who built new lives are commemorated at Freedom Park near Williamsburg, on land that formerly belonged to the Green Spring plantation. Freedom Park, although little visited, is a worthy place to visit each Fourth of July.

For further information on slavery in Virginia and in the Ludwell/Lee family, see our article: The Lees, Ludwells, and Slavery in Colonial Virginia