When Philip Ludwel III died in London on March 25, 1767, he was the last of a line of male Ludwells who had been prominent citizens, planters, and government officials of Virginia – the wealthiest and most populous British colony in North America. In the words of an official testimonial by Thomas Jefferson, affixed with the great seal of the United States in 1788:

While the statesman-like qualities of the Ludwell family males ended with Philip Ludwell’s repose in 1767, his intellectual interests continued in the person of his son-in-law, John Paradise. 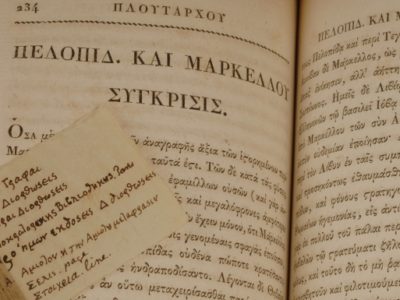 A scrap of paper with Greek notes in Jefferson’s handwriting tucked in a volume of Plutarch’s “Lives.” Photo: Joe Angeles/WUSTL Photos

In 1769, Philip Ludwell III’s youngest daughter, Lucy Ludwell, married John Paradise in London. John was born in 1743 in Salonika, Greece, the son of the British consul Peter Paradise, who was also an official of the Levant Company. An Orthodox Christian, John Paradise spoke numerous languages including English, Greek, Turkish, Italian, and French, and was occasionally called upon in London diplomatic circles for his interpreter skills. He was also a member of the Royal Society, even while identifying as an American during the years of the Revolutionary War. He eventually became the first-ever naturalized U.S. citizen.

In the 1780s, Paradise and Thomas Jefferson – born in the same year – struck up a mutual friendship, both being of an intellectual nature characterized by an unending pursuit of knowledge. One example of this friendship is Jefferson’s letter of May 25, 1786, written from his home in Paris to the London-based Paradise, requesting instruction in how to pronounce modern Greek:

[I wish to] avail myself of your friendly offers to instruct me in the modern pronunciation of the Greek … I will only ask you to write down the Greek alphabet & the diphthongs, and opposite to each letter or diphthong, to express it’s [sic] power in Italian orthography, adding perhaps an example or two of a greek word, in Greek letters, & then in the Italian letters of equivalent sound.*

In ensuing years, prior to his return to the United States to serve as the country’s first Secretary of State, Jefferson had ample opportunity to “repay” his friend for this and various other friendly services. In point of fact, amidst the crush of his official duties as minister to France, Jefferson served as a de-facto family lawyer for the Ludwell-Paradises, helping the couple while they endured personal and financial difficulties. At this time, John Paradise was able to help his eminent friend in one small way:  upon his return to Paris after a journey to America in 1787-88, Paradise delivered to Jefferson copies of the debates of the recently held Constitutional Convention of 1787.