This Saturday, May 14, 2016, will mark the four hundred and ninth anniversary of the founding of the first permanent English settlement in the New World, at Jamestown, Virginia. Today Jamestown is the site of one of the most active archaeological sites on the planet and evidence is being turned up that has brought into question the established view of the overwhelmingly Protestant character of America’s first English settlement.

One aspect of Jamestown that has so far received little attention is its connection with the Muscovy Company, a group of English merchants who in 1553 – one hundred years after the Fall of Constantinople to the Ottoman Turks – sought to discover a north east passage from England to China. Such a route would avoid Turkish control of the traditional overland routes through Central Asia and the Near East. It was the Muscovy Company merchants who some fifty years after their own founding would provide the ships and many of the crew who would bring the first settlers to Jamestown. The Muscovy Company and the Virginia Company were also connected by early officers such as Sir Thomas Smythe who was in Russia between 1604-1605 as a special Ambassador to the Tsar and then from 1609-1618 served as Treasurer of the Virginia Company. 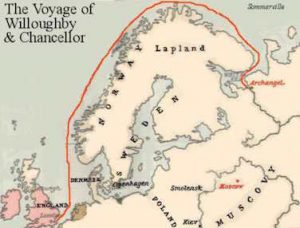 From its earliest beginning the Muscovy Company came into contact with the Faith and life of the Orthodox Church in Russia. Of the three ships that set sail from London in the summer of 1553 only one was to return home. This was the Edward, under the command of the young navigator Richard Chancellor. As the three ships had rounded the far north of Scandinavia in a great storm they became separated and Chancellor’s ship was to find safety at the mouth of a great river, the Northern Dvina, on what we now know as the White Sea coast of Russia. On the shore at the mouth of the river they could see a large wooden building: it was an Orthodox monastery of St Nicholas, the patron saint of sailors. The monastery was at that time home to some twenty monks. Their black attire reminded the Englishmen of their own countries in their youth before the Protestant King Henry VIII began the process of the dissolution of the monasteries some twenty years earlier. Chancellor records that the monastery’s church was of plain external appearance but inside was “full of painted images, tapers and candles.” Whilst Chancellor and some of his men headed south to meet the ruler of this newly discovered land most of his crew remained for the winter and into the following spring at the monastery. St Nicholas would continue to serve as the basecamp for the Muscovy Company and trade between England and Russia for many decades thereafter – beyond the time of the first settlement in Virginia.

Chancellor went first to the provincial capital of Kholmogory where he also visited the churches and noted the uniquely Russian practice of having adjacent summer and winter houses of worship. He was staggered by the extensive presence of icons both in churches and private homes. To his Protestant sensibilities these smacked of idolatry and superstition. For all of his apparent disgust at this and other things he became remarkably familiar with Orthodox practice and reports this in copious details for his countrymen’s benefit:

They have the Sacrament of the Lords supper in both kinds, and more ceremonies than we have. They present them in a dish in both kinds together, and carrie them rounde about the Church upon the Priestes head, and so doe minister at all such times as any shall require. They be great offerers of Candles, and sometimes of money, which wee call in England, Soul pense, with more ceremonies than I am able to declare. They have foure Lents in the yeere, whereof our Lent is the greatest…In these Lents they eate neither Butter, Egges, Milke, or Cheese; but they are very straitely kept with Fish, Cabbages, and Rootes.

Chancellor was at last given permission to travel on to Moscow where his exposure to Orthodoxy increased. He was successful in establishing relations with the Russian Tsar Ivan the Terrible and thus to open the way for many other English merchants and diplomats to travel to Muscovy.

Chancellor’s second visit to Moscow in 1555

In the autumn of 1557 four ships arrived at St Nicholas from England and another delegation headed by Anthony Jenkinson made their way to Moscow. Jenkinson elucidates in vivid detail the Orthodox rituals and practices he witnessed. He writes of the blessing of the waters at Theophany where after the priests sang, blessed and censed “there came about 5000 pots to be filled of that water: for that Moscovite that hath no part of that water, thinks himself unhappy.” He was present at the beginning of Great Lent when in “the first week they eate eggs, milke, cheese and butter, and make great cheare with pancakes and such other things, one friend visiting another…” At the end of Lent he describes in great detail “a very solemne procession” on Palm Sunday. The Metropolitan of Moscow rode side saddle on a horse with a gold covered Gospel book on his lap and a gold cross with which he blessed the people. He was accompanied by young men carrying icons and banners and more than a hundred priests wearing vestments “of white damaske set and imbrodered round about with faire and orient pearles, as great as pease, and among them certain sapphires and other stones.” His description of Holy Week that follows brings him to Easter where he seems particularly struck by the practice of dying great quantities of eggs red as:

a token of the resurrection, wherof they rejoyce. For when two friends meete during the Easter holy dayes, they come and take one another by the hand: the one of them sayeth, the Lord or Christ is Risen, the other answereth, it is so of a truth, and then they kisse and exchange their eggs both men and women, continuing in kissing for days together.

Orthodoxy in Russia was encountered in a direct and personal way by educated English merchants who recorded in remarkable detail what they saw and learned for the benefit of their own nation, still recently torn by division between the Catholic and Protestant traditions of Christianity. And some of these men were amongst the first English settlers of the United States where it all began at Jamestown, Virginia, just over four centuries ago.