Say “1600 Pennsylvania Avenue” and people know what you’re referring to. It’s more than just the White House. It’s the home of, arguably, the most powerful person in the world, and all that comes with that position.

So if you say “Green Spring,” does that ring a bell? If you lived in the 17th and 18th centuries in Virginia, and arguably in many other North American British colonies, the reaction would be similar to “1600 Pennsylvania.” In the mid-1600s, Green Spring Plantation was the home of the Royal Governor William Berkeley, followed by the prominent Ludwell family until 1767, and finally the celebrated Lee family through the turn of the 19th century.

The “Only Tollerable Place for a Governor”

So what clues still exist to give us an idea of the significance of Green Spring during colonial times and the early years of the American republic?

Where Is Green Spring?

First, its location. Green Spring – both the mansion house and the surrounding plantation – sat approximately five miles west of the 1700s capital of Williamsburg, and a few miles north of Williamsburg’s predecessor, Jamestown, the first English colonial capital in North America. Today, Green Spring’s foundations lie beneath topsoil on property owned by the National Park Service. There’s little to see except the spring (yes, it’s green with moss), which still produces clear running water. The local Native Americans imbibed from this water source prior to European colonization. 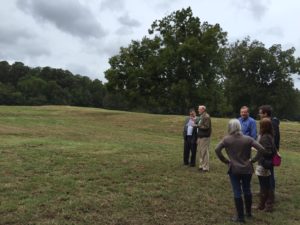 After King Charles I appointed William Berkeley (pronounced “Barkeley”) as royal governor of Virginia in 1641, he arrived in the colony and took possession of the Green Spring property, turning it into a place of public and social distinction. While the mansion itself was impressive (see this video animation of the architectural evolution of Green Spring) and sat on a high natural terrace facing the capital of Jamestown, Berkeley also sought to create pleasure gardens for his guests to the rear of the mansion. 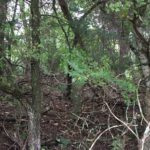 Looking up the eastern berm, remains of colonial-era Green Spring icehouse through the overgrowth.

To this day, two grassy berms still rise from the land behind where the mansion stood – areas from which the governor’s guests could enjoy entertainments and spectacles. A cavity over top the overgrown eastern berm is all that remains of Green Spring’s icehouse, a luxury of the time.

Later, in the early 1700s, Philip Ludwell II made clear to Virginia society that he was attuned to the latest trends, building Anglo-Italian gardens, garden walls, and a forecourt. These features were similar to the same external elements found in the newly built Governor’s Palace, down the road in the capital city. 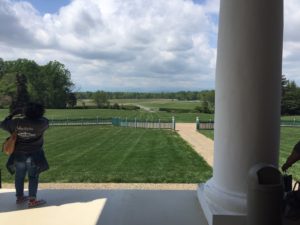 View west of the Blue Ridge Mountains from the front porch of Montpelier, home of President James Madison.

The front of Green Spring’s mansion is said to have had a prominent view of Jamestown, downhill and to the south. Today, the area is forested and feels remote. Yet we can get an idea of what Berkeley’s intention was by visiting Montpelier, the home of U.S. President James Madison, over 100 miles to the northwest in the hills of Virginia’s Piedmont country.

The Madison family, like the Berkeleys, Ludwells, and Lees, arrived in Virginia in the 1600s. Heading west into the Piedmont as the colony expanded, they built Montpelier to impress, and visitors still can enjoy the beautiful view of the Blue Ridge Mountains off the front porch. 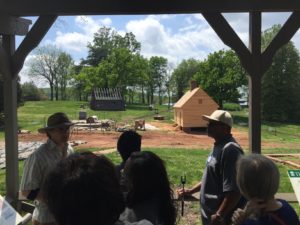 Matt Reeves, director of archaeology and landscape restoration at Montpelier, gives a tour of restoration of slave section of Montpelier plantation.

In an effort to show what life was like in the early 1800s on the Madison plantation, Dr. Matthew B. Reeves and the rest of the Montpelier archaeological team are working to restore not only the mansion, but also the grounds of the plantation, including crops of the day. More importantly, they are also rebuilding an area of the plantation that was crucial to its success and working life: the slave quarters in the yard just south of the mansion. Their work highlights the fact that large plantations in Virginia were sustained through the use of African slave labor.

The Political and Social Stature of Architecture 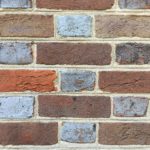 In a 2005 essay in the Virginia Historical Society’s quarterly magazine, historian Virginia B. Price asserted that numerous 18th-century public buildings in Virginia were influenced by Green Spring. Following Governor Berkeley’s death and the house’s transmission to the Ludwell family, Green Spring appeared to be regularly updated to conform to the latest architectural styles. As Price noted, “Wealthy and influential, [Philip Ludwell II] elected to update the house Berkeley fashioned, thereby capitalizing on the prestige associated with the mansion for fifty years or more.” 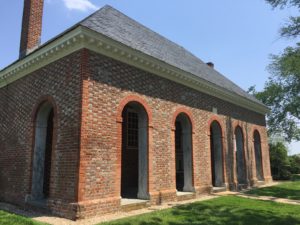 The original 1600s house had already been expanded, with an arcaded addition on the west side. Price suggests that the arcaded fronts of numerous Virginia county courthouses – including Hanover, Nelson, King William, Isle of Wight, Charles City, and Richmond – are, “arguably, the Green Spring house’s architectural legacy.”

Hanover Courthouse, approximately 60 miles northwest of Green Spring and built in 1735, is the third oldest courthouse still in use in the United States, and is thought to feature much the same arcaded front as did Green Spring. It features the same Flemish bond brickwork that was in style in the early 1700s and which can be found in colonial Williamsburg, such as in the Ludwells’ townhouse (the “Ludwell-Paradise House”) on the main thoroughfare, Duke of Gloucester Street. The same brickwork can also be found at Stratford Hall in the Northern Neck, built at a similar date by Thomas Lee and his wife, Hannah, sister to Philip Ludwell III. Not thirty years after the courthouse’s construction, the firebrand Patrick Henry publicly referred to King George III as a “Tyrant” in the famous Parson’s Cause trial in Hanover Courthouse, foreshadowing future troubles between the colonies and the mother country. 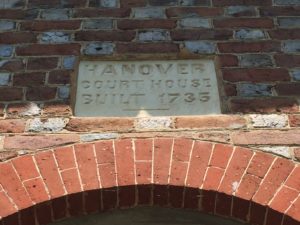 In the first years of Hanover Courthouse’s existence, Green Spring’s final Ludwell owner, Philip Ludwell III, was finishing up his studies at the College of William & Mary, marrying the well-to-do Frances Grymes, and starting a family. In 1737-38, he also journeyed to London to be received into the Eastern Orthodox Church, an act quite unusual for someone who as a teenager had already inherited the “1600 Pennsylvania” of the day, and who was already fully integrated into the times, tastes, and social life of the colony of Virginia.

Featured (top) photo credit: A recreation of Green Spring Plantation. View from the causeway (now forested) to the forecourt and front of the manor house. Courtesy National Park Service, Colonial National Historical Park, Jamestown Collection. This is a conceptual rendering ONLY.