Invited to 1600s England by the Berkeley-Ludwell family, this Greek archbishop’s London parish was supported by two English kings before he took his faith to South America.

Since discovering the story of Philip Ludwell III’s embrace of the Orthodox Faith, my research has sought to connect this event to other events and personalities in the broader transatlantic world at that time. In particular, I have tried to address the question of whether Ludwell’s conversion was an isolated incident, or perhaps part of his own family’s heritage or even of a wider pattern in the early history of the European presence in the Americas.

Recently I became aware of a story that, together with much other material I am collecting, points toward a much broader familial and societal context for Ludwell’s actions in the first half of the eighteenth century. 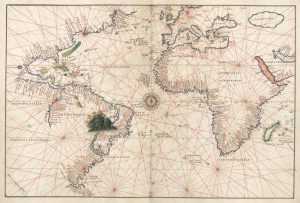 A 16th-c. portolan atlas by Battista Agnese, an Italian Renaissance cartographer, mapping the eastern coastline of South America. Source: US Library of Congress

This story takes us back one hundred years before the arrival of the Russian monastic missionaries to Kodiak, Alaska, and southeast to the diametrically opposite end of the New World – the northeastern shore of Argentina. There, on the first day of March in 1694, the San Sebastian, a small fishing boat, ran aground just north of Buenos Aires. The boat had been traveling down the Atlantic Coast of South America from the Portuguese colony of Brazil and was endeavouring to reach Colonia del Sacramento, at that time also a Portuguese settlement and now a small city of modern Uruguay.

Seven persons were rescued from the wreckage of the San Sebastian: two Roman Catholic friars of the Augustinian order, a Spaniard and an Italian; two servants, one English, one Portuguese; two black African slaves; and last, the focus of our story and the leader of the group, an Archbishop of the Orthodox Church, Joseph Georgirenes, who introduced himself to his rescuers as the Archbishop of Samos.

None of the refugees was able to produce a copy of the special permit required by the Spanish authorities to travel to the New World: Georgirenes claimed to have had one but to have lost it during his previous travels in the Bahia region of northern Brazil. But he was able to offer a Turkish document in Arabic script that he claimed to be his letter of appointment by the Ottoman Sultan Mehmed IV as Archbishop of Samos back in 1666.

Archbishop Georgirenes: From the Aegean, Athos, and Constantinople to Western Europe 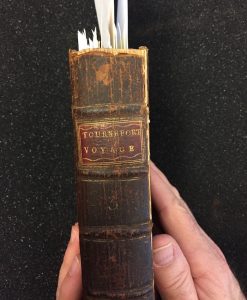 Who was Joseph Georgirenes? He was born around 1635 on the Greek island of Melos in the Aegean sea, north of Crete. The late seventeenth-century French traveler, Tournefort, described the island in his work A Voyage into the Levant, a book that was to form part of the library of the young Philip Ludwell III. Tournefort described Melos as “wretchedly poor” and added that the island’s “women have no other Employment but making Love and Cotton Stockings.”

More significantly for Georgirenes’ future adventures, the island had a mixed Orthodox and Roman Catholic population that seems to have disposed him toward a breadth of perspective of inter Christian relations that would not find acceptance within his own Orthodox Church.

He is recorded by one of his French contemporaries as spending six years of his early adulthood on the Holy Mountain of Athos followed by a similar period in the Great City of Constantinople. As previously noted he was ordained Archbishop of the island of Samos in the eastern Aegean and neighboring Ikaria where he served from 1667 until his resignation in 1671.

The reasons for his resignation of this position are less than clear: the fall of Crete to the Ottoman Turks in 1669 brought renewed pressure on the Orthodox living everywhere in their domain. Some Orthodox bishops looked West for support and Georgirenes is listed in 1671 as one of eight bishops supporting Theophanes, Metropolitan of Paronaxia, in his failed attempt to elect a new Patriarch in Constantinople who would recognize the Roman Pope as his superior. For this scheme Theophanes was denounced as “an accursed Latin” and a “second Antichrist.”

In any event, Georgirenes resigned his see in Samos and went to the island of Patmos where he became guardian of the cave of the Apocalypse, where according to holy tradition the Apostle John had received his Revelation. But he would continue to use the title “Archbishop of Samos” for the rest of his life. 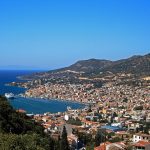 The island of Samos in the eastern Aegean, where Joseph Georgirenes was archbishop from 1667 to 1671. Source: Pe-sa 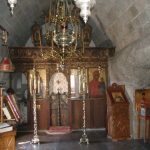 After leaving Samos, Georgirenes was guardian of the cave of the Apocalypse (shown here) on Patmos. Source: Orthodox Wiki

After about four years on Patmos, in 1674 Georgirenes headed west, ostensibly with the blessing of his abbot to raise money for the monastery. He spent four years in Italy where he helped organize what were to all intents and purposes Greek communities under the authority of the Roman hierarchy, without ever renouncing his Orthodox credentials as such. After a failed similar attempt in France, he arrived in England in 1676 to throw his weight behind existing efforts of Greeks in London to form their own Orthodox community and build a church.

To London, By Invitation of the Berkeleys of England and Virginia 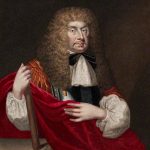 Intriguingly, Georgirenes received his papers to come to England from Lord John Berkeley of Stratton, whom he met in Paris on several occasions. This Berkeley was the elder brother of Sir William Berkeley, the long-standing colonial Governor of Virginia, who built the home at Green Spring where Philip Ludwell III was born in 1716. Lord John was an ambassador to Sweden, a royalist veteran of the English Civil War, and a lord proprietor of the colonies of Carolina and New Jersey. In his first year as proprietor of New Jersey, Berkeley signed the Concessions and Agreements which allowed freedom of religion in the colony.

The Berkeleys and Ludwells were in fact relatives going back to their common origins in the Somerset town of Bruton in southwest England. Thomas Ludwell, Philip Ludwell III’s great uncle, served under Lord John Berkeley during the English civil war and it was later at Lord John’s initiative that Thomas and his younger brother Philip Ludwell I would journey to Virginia to serve Governor Berkeley. 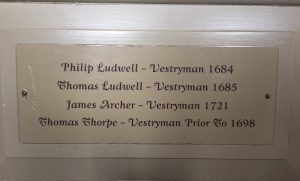 It should also be noted that Lord John had his own interest in America as one of the proprietors of the New Jersey colony from 1664 to 1674. From letters we know that Thomas Ludwell and Lord John Berkeley were still in touch in 1667, less than a decade before Georgirenes arrived in Paris. 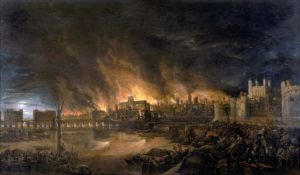 The Great Fire of London, 1666, with old St Paul’s at center. At the invitation of Lord John Berkeley (who was related to the Ludwells), Archbishop Joseph Georgirenes spent time in London while the city was rebuilding from this conflagration. Source: Wikipedia

Lord John’s interest in New Jersey was a direct result of his close personal relationship with the English King Charles II and Charles’ younger brother the Duke of York – the future King James II. Charles and James were also Georgirenes’ main financial backers in building the Greek church in Soho in London that functioned briefly from approximately 1677 to 1682.

And yet, as we noted in a previous Ludwell Blog post, we know from a parliamentary petition in 1658 that a Bishop Anastasius Cominus of the Alexandrian Church had previously sought permission to act as a “Public Preacher” in England.

As with his activities in Italy, Georgirenes appears to have been surprisingly accommodating to the local ecclesiastical authorities, in this case the Anglican Bishop of London, Henry Compton. But Georgirenes was also suspected of Roman Catholic sympathies and it became prudent for him to leave England amidst the hysteria of the Popish Plot. 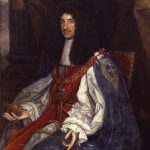 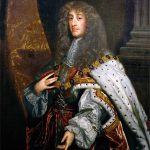 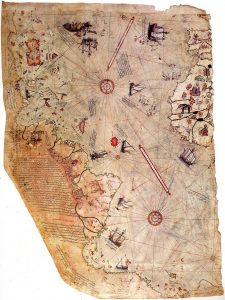 The world map of Ottoman cartographer Piri Reis, from 1513, shows that explorers were already mapping the coast of South America (lower left) 150 years before Greek Archbishop Georgirenes arrived in the New World. This was a gift to the Ottoman sultan, and partly based on a map by Christopher Columbus. Source: Wikipedia

We know little of what became of Georgirenes in the twelve years between his departure from England in 1682 and his arrival in Argentina in 1694. What is known comes from the investigation into him carried out by the Spanish authorities after his arrival in the New World.

It seems that Georgirenes went from England to Portugal and from there to Seville in Spain where in November 1682 he was granted a royal license to travel to the Americas and to collect alms there. So Georgirenes may well have been in the Americas for over ten years before his shipwreck on the Argentine coast. It seems he was not the only one of Orthodox or other Eastern Christian background to do this: a Spanish law promulgated in 1681 makes specific reference in this regard to “Greeks, Armenians and monks of mount Sinai.”

So was Joseph Georgirenes, the retired Archbishop of Samos, the first Orthodox clergyman to set foot in the New World? Was Philip Ludwell III some forty years later aware of Georgirenes’ story? At this time I can only speculate whether any Orthodox clergy arrived after 1492 and before 1694 but I think it highly possible that they did. 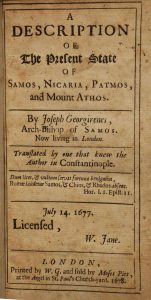 Taking into consideration both the familial connection between the Berkeleys and Ludwells and the Ludwells’ involvement in the early eighteenth-century Orthodox presence in London, I think Philip Ludwell III would have been aware of the story of Georgirenes’ life and at the least have read the book the Archbishop of Samos published in English translation in London in 1677, A Description of The Present State of Samos, Nicaria, Patmos and Mount Athos.

But can we say that Georgirenes was still Orthodox and not Roman Catholic by the time he reached Argentina?  In 1695, whilst in Buenos Aires, he wrote in his will that he desired to live and die as a Catholic. But by 1697 the Roman Catholic Inquisition, based in Lima, Peru, was concerned that he had reverted to his Orthodox belief and Inquisition authorities were actively seeking to have him deported from the New World.

Despite these attempts, Georgirenes seems to have lived out his days in Argentina. Local sources refer to a baptism taking place there on April 8, 1700 by the Archbishop of Patmos. Was the rite served Orthodox or Catholic? I do not know. But perhaps I can hope that the service did follow the description of the rite that Georgirenes gives in the chapter on Samos of his aforementioned work. It concludes with these words:

Then delivering the Child into the hands of the Godfathers, he puts a shirt on the Child, with these words; Jesus Christ our merciful God, clothed with Light, give thee a bright Garment.